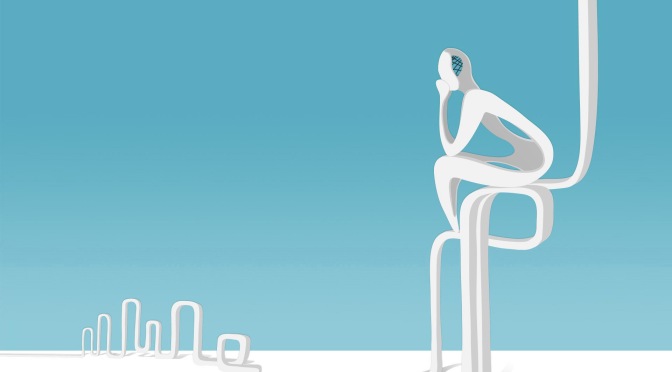 The statue of the guy, naked and in stern thought–that is me, only minus the muscles and the hanging man junk. The Thinker. I am he. I think all of the time. There is never a moment during the day (except maybe when I am writing) when I am not thinking about one thing or another. I could be thinking about future plans or something someone said three days ago or how to look busy or how much weight I still have to lose or if all that damned running is really going to get me ready to Tri….I think…a lot. It is mental noise I wish I could just shut off sometimes, but even when I manage to escape it for a moment it is still playing in the background.

I was talking to a guy friend of mine about relationships and how it is inevitable for one person to like the other person a little more. He said as a general rule, most things with him are black and white. “Either I like you or I don’t. That’s it.” He used to over think and measure things that really had no measurable value. “I’m simple. I go by instinct more than planning or thinking. It makes life so much easier.” He said he lives by something someone told him when he was younger, A long thought is a wrong thought. Seven words never held so much truth.

When we got off the phone, I mulled it over–flipping it upside down, turning it around in my head–err–uh–essentially thinking it to death. There was so much truth to the statement. The longer we think about something and twist it and turn it, usually the wrong-er it is. What if we, as a general rule, just went with our guts? Would we have missed out on the suffering, the pain, and the ass clowns of life situations?

Naturally, we have to think things through if they are life altering…but who says we have to spend forever thinking them through? No one…except the naked Thinker forever frozen in his own personal brain teaser. After careful thought (it’s a hard habit to break…sue me), I decided to adopt my friend’s philosophy just a tad. No long thoughts. I will be conscious in my decision making (I just can’t go completely rogue), but I won’t spend so much time missing out on life due to over thinking (and planning I guess). Whew….I’m feeling freer already….

One thought on “A Long Thought…Is A Wrong Thought”