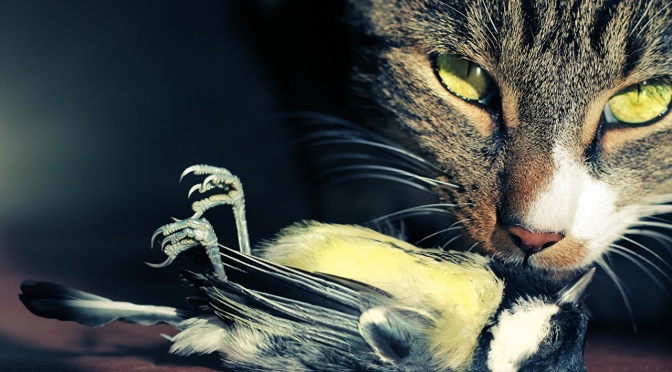 When I was a teenager, we had a cat named Dusty. He was an inside/outside kinda guy. On his outdoor excursions, he would bring us gifts. Running up the porch steps only to be halted by a dead bird is definitely not the best greeting. For me, it was gross. For him, though, it was love. Twisted, yea, but cats are special like that. After a while, I got used to his dead little woodland gifts. I found a way to let go of my perceptions and accepted his.

People can be Dustys. They go out and plop dead stuff on the Welcome mat. “Welcome,” they say, “I love you. See?” If you are smart, you roll with it. You pick it up and toss it in the neighbor’s bushes, always giving them the side eye. If you are too hung up on how wrong it is, you leave it to rot and decay. The stink rising to greet you day in and day out. I am guilty of letting other’s Dusty-gifts sit and stew until the stink was unbearable. Stubborn to the core.

Letting go is not my strong suit. I hold onto everything for far too long. But I can be the bigger person. I have proof. I can also be pretty petty (for which I also have proof). In the end, I suppose it is all about letting go of my perception and let others have theirs. What is right and what I feel is right does not negate the fact that from their vantage point they see right, too. Their right is stupid (btw), but who am I to judge? If I let go…If I unclench my fists and rest my heart, I won’t have to smell the stink. I can just chuck it up to a twisted kind of love, toss it over the fence and carry on.

Me. Meet Crossroads. Crossroads. Meet Me. I suppose this feeling of slightly lost could be attributed to the new year approaching, the Boy getting older, and the Girl’s new found teenage attitude. There is something brewing in this head/heart/soul of mine and I am uneasy with not being able to put a finger on what to do with it.

As a gift to myself, I purchased Act Like A Success by Steve Harvey. His explanation of the Gift is interesting and makes much sense, however, what is confusing about the Gift is how exactly one is to operate in the gift. I know my gift…the strongest one of them anyway…and it is writing. I can write with my eyes closed. I can write in my sleep. I could probably write standing on my head if my cleavage didn’t smother me first. I. Can. Write. It is my gift. Period. Score one for me (because I actually know that), but–err–what the hell am I suppose to do with it?

I sat at work and took about (5) internet quizzes on gift assessment. Know what all of them said? Artist. Duh. I knew that already. What each quiz failed to explain is what I was suppose to do with that knowledge. Young Gun said I should just have fun with it and explore, but (as I so cheerfully explained to him) I am almost 40…he is not even close so he can explore until his heart is content. My clock is ticking. Yes, yes, I know what some of you are probably thinking: there is no time limit on exploration. I got that. What there is a time limit on is operating in one’s gift and that (for me) is not up for debate.

I am annoyed by not knowing what to do with what was given. I feel like I have been given an engine to put together with no Chilton’s for reference. I suppose I will stop with the internet quizzes (as they are only telling me what I already know) and just continue to float until I get to the per-ordained destination. I am not chasing money. I am not chasing fame. I am not chasing tangible, external power stuff. I am chasing the unabashed freedom that operating fully in the Gift will give. Doesn’t that count for sun’tin?

Today I AM gifting. I love giving gifts. Giving is a special experience, if it is done right. It is a rare peek into the brain of the giver. The receiver gets to see how they are being viewed, are they being listened to, and if they are truly appreciated. Every once in a while I find myself buying a muffin or a card (that never gets sent…my post office skills are horrid) or a small trinket just to say ‘I see you’. Today, I am seeing someone. Unsure of who just yet, but I feel the gift of giving stirring around in my belly. I hope it makes a difference in their day….it will certainly make a difference in mine 🙂